Today I’m pleased to announce the release of MarkdownPad 2, which is the result of over one year of development, thousands of lines of code, hundreds of code commits, and dozens of beta testers.

MarkdownPad 2 is a completely new version of MarkdownPad. It has all the features you love from the original version, and includes dozens of exciting new features and improvements.

A brief history of MarkdownPad

When I created the original version of MarkdownPad in 2011, I had no idea it would become one of the most popular Markdown editors for Windows. At the time, I had just read an great post by Peter Lyons called Leveling Up: Career Advancement for Software Developers, and in a section titled Your Work Journal, he wrote:

Don’t skip this one. This is a simple technique that can make a huge difference. Start a work journal - it can be nothing more than a simple text file. You should have one single journal for everything you do for your job. Organize it chronologically […] and make sure your text editor can be configured to instantly insert a timestamp, since you can use this to organize your journal.

Over time, your journal becomes an awesome treasure trove of knowledge.

This idea really resonated with me, and I immediately began taking simple-but-thorough notes in Notepad++. After a few weeks of writing, though, I found myself wishing I had a way to write a plaintext document that I could quickly turn into an attractive HTML document to share.

And then I discovered the Markdown markup language.

Now at the time, Markdown was an awkward, lanky adolescent in the Windows world. Being the child of Apple star John Gruber, Markdown simply didn’t have the developer love on Windows that it needed to shine. So with John’s permission, I fired up Visual Studio, and began developing what I intended to be a simple note-taking tool for my personal use.

After MarkdownPad had been downloaded a few thousand times, I realized I had created something pretty darn useful.

MarkdownPad 2, rebuilt from the ground up

One of the best things about creating MarkdownPad was the tremendous amount of feedback I received from the community of Markdown users. From day one, I received enthusiastic emails, tweets, and forum posts from MarkdownPad users ranging from software developers to professional authors to students. I saved every feature request, bug report, and suggestion, and I started realizing that if I wanted to make the perfect Markdown editor for Windows, I needed to give it a fresh start.

A little over a year ago, I did just that: I created a blank new project in Visual Studio, and armed with a year’s worth of knowledge and user feedback, I set out to create MarkdownPad 2.

If any of you have ever tried recreating something from scratch - software, a song, a novel, or a maybe a piece of art - you know that it isn’t as simple as sitting down and adding a few new features and a splash of paint. With MarkdownPad 2, I set out to fully re-architect the program to be more robust, efficient, extensible, and to be easy to support in the future.

I’m pleased to say I accomplished all of those things. 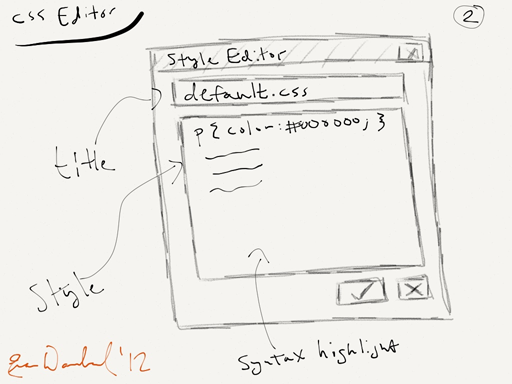 An early sketch of the MarkdownPad 2 Custom Stylesheet Editor

MarkdownPad 2 is available in two versions: Free and Pro. The Free version offers all of the features you’re currently using in the original version of MarkdownPad, and includes new features like a tabbed document interface, spell check, Markdown syntax highlighting, multiple custom CSS files support, and a variety of other improvements.

The Pro version includes everything in the Free version, and adds great new features like support for new Markdown processors (GitHub Flavored Markdown and Markdown Extra, including Table support), PDF export, auto-save, session management, a built-in image uploader, and is licensed for commercial use.

As a Pro user, you’ll get early access to new features as soon as they’re available. You’re also supporting me as an independent software developer, and giving me great encouragement to continue developing new features and updates.

With two versions of MarkdownPad, I hope to provide the best possible Markdown editor for Windows, and to also earn some compensation for the hundreds of hours I’ve dedicated to developing this high quality software.

You can check out a full feature comparison of Free vs. Pro, and you can also purchase a MarkdownPad Pro license.

This is just the beginning

Each year, Markdown becomes more ubiquitous on the web. I love that people around the world are using it to create their documentation, blog posts, websites, articles, and READMEs. I truly believe that the simplicity and robustness of the Markdown language makes it one of the best ways for people to communicate on the internet.

With Markdown being embraced by GitHub, the sprawling StackExchange network, Reddit, and hundreds of new start-ups, I believe this technology has a very bright future. I promise to be here, continuing to listen to your feedback via Twitter (@MarkdownPad and @evanw), email, and forum posts.

I’ve got dozens of new MarkdownPad features lined up for development this year, and I can’t wait to share them with you.

p.s.: I couldn’t have done any of this without the wonderful feedback from MarkdownPad users, the dedicated testing of my beta testers, and the valuable advice I’ve received from people both in person and around the world via the internet. My sincere thanks to all of you.